Venture Debt refers to any form of debt financing provided to a company that is still dependent on Venture Capital (VC) financing to fund its operations. InnoVen Capital’s core offering is a medium term loan to VC-backed companies, depending on the stage of the company, quantum of equity raised and nature of the requirement. Interest rates and fees are fixed for the tenor of the loan. Repayment of the loan principal and interest payments are typically made on a monthly basis. If the borrower is significantly successful through its lifecycle and has a liquidity event in the form of an IPO or a buyout, an equity “kicker” allows the lender to make some additional returns to compensate for the higher risk. InnoVen Capital does not normally mandate the end use for the funds and the company is free to use the loan proceeds to fund any number of uses which may include accelerating product development, key hires, expanding to a new market, making acquisitions, operational working capital or even refinancing. While InnoVen Capital does not take board seats on its portfolio companies, the team is happy to leverage its experience and network across geographies, a large number of companies and investors to assist clients as and when required in their business or strategic pursuits. While InnoVen Capital has a sector agnostic approach, the preference is to partner with disruptive companies in Technology, Internet, Media, Healthcare and Consumer.

What is Venture Lending?

Venture loans are a type of debt financing typically provided to venture-backed companies. Venture loans are generally a complement to venture capital and provide value to fast growing companies and their existing investors by minimizing equity dilution when raising new rounds of capital. Unlike traditional bank lending, venture loans are catered towards startups and growth companies that do not necessarily have positive cashflow or hard assets to use as collateral.

When is the right time for taking a Venture Loan?

The target market for venture loans is typically when a company is generating revenue but does not have the years of operating history to obtain a traditional bank facility. Venture loans are generally taken alongside an equity financing round and can play a significant role in reducing equity dilution for founders and existing shareholders. 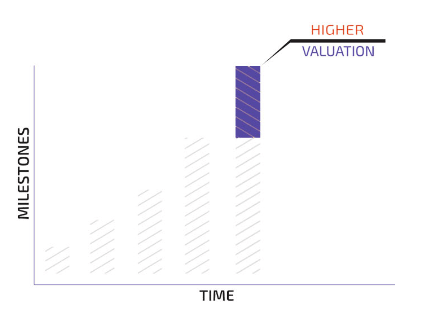 What are the typical uses for a Venture Loan?

Borrowers are not typically limited in the way that they use venture loans; the loans can be used towards financing growth, cushioning for the unexpected, general corporate purposes, funding to profitability and financing acquisitions. The benefits of taking a venture loan is to provide funds to accelerate growth, achieve higher valuations and/or cushion for the unexpected. In all cases, venture loans are beneficial for existing shareholders because it allows a company to raise capital without giving up additional equity.

When should I take a Venture Loan?

In this scenario, the company has just raised a Series A round, which is expected to extend its cash runway for 15 months at which point the company has projected to achieve a certain valuation. However, two months after closing its Series A, the company realizes that there is an opportunity to open a new market in the region (accelerate growth), and wants to seize the opportunity but did not allocate extra cash to do so. The company is left with a predicament – it can either use its Series A funds towards accelerating growth and thus reducing its cash runway to less than 15 months, or it can decide to miss the opportunity and therefore also miss the potential to increase its valuation.

A solution would be to take a venture loan. By taking a loan, the company does not need to return to its equity investors after a short 2-month period to ask for additional capital at a similar valuation as its Series A round and it does not need to reduce its cash runway and give up opportunities that were already budgeted for in the next 15 months. By taking a venture loan, the company would be able to seize the new opportunity, maintain its cash runway of 15 months and even potentially increase valuation in that time.

In this scenario, the company has just raised a Series A round, which is expected to extend its cash runway for 15 months at which point the company has projected to achieve a certain valuation. However, things do not always go as planned and the company was unable to meet its projected milestones due to unexpected delays. Therefore, it burnt through the capital raised in its Series A round and will likely raise a flat Series B round.

A solution could have been to raise a venture loan alongside its Series A round in order to plan (cushion) for the unexpected scenario that it would not meet its projected plan. Thus, the company would have likely been able to extend its cash runway and achieve the necessary milestones prior to running out of cash and having to raise a Series B round of financing.

In this scenario, a company is looking to raise a Series B round. Its founders are hesitant, as raising a round now would mean they would have to dilute their shareholding even further and lose control of the company.

A solution could be to raise a venture loan alongside its Series B round by raising a part-equity and part-debt round. By doing so, it would allow the company to raise its desired amount of capital, adhere to a venture lender’s typical expectation to come alongside an equity financing round and most importantly allow the founders to reduce their equity dilution.